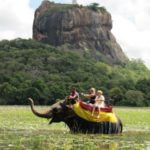 The representative of Lucky-Fly will meet arrival at Bandaranayaka International airport, on arrival clients. Thereafter they will be introduced to the local tour guide/ Chauffeur who will be accompanying them around the Island.

Sigiriya – is home to the 5th Century “Fortress in the Sky” which is perhaps the most fantastic single wonder of the Island. It is also known as Lion Rock because of the huge lion that used to stand at the entrance to the fortress. Within its triple-moated defense the huge rock rises almost to a sheer height of 500ft. On its summit are the foundations of what was once a great and sumptuous palace and gardens complete with swimming pool. On one of the stairways the only known ancient work of Sinhala secular painting survived in the form of Frescoes of life sized damsels in all the freshness and delicacy of their original color.

In the evening visit the Dambulla cave temple.

Dambulla is famous for the five cave Temples on a rock.  The first 03 caves are better, older and larger than the other two.  Some caves dates to 1st C.B.C. All the 5 cave walls and ceilings are covered with Buddhist murals and there are more than 130 Buddha statues, statues of Gods and Kings are also found here

After breakfast proceed to Kandy.

En-route visit a Spice Garden at Matale and see the luscious Cinnamons, Cardamoms, Pepper plants etc. You can also purchase your requirements of spices.

Kandy – The hill capital, venue of the annual Perahera. The last stronghold of the Sinhala Kings was finally ceded to the British in 1815. Kandy is an example of the Buddhism’s influence in Sri Lanka today. Temple’s shrines and monasteries keeping alive Buddhist traditions are everywhere.

Temple of the Sacred Tooth Relic  – Ever since 4th Century A.D, when the Buddha’s Tooth was brought to Sri Lanka hidden from sacrilegious hands in an Orissan princess’ hair, the Relic has grown in repute and holiness in Sri Lanka and throughout the Buddhist world. It is considered Sri Lanka’s most prized possession.

After breakfast visit to Royal botanical Garden at Peradeniya.

Royal Botanical Gardens – 147 acres in extent: started in 1374 as a pleasure garden of the King’s of Kandy. There are more than 5000 species of tree and plants. Some and endemic as well as flora from the tropical world. Spice garden and Orchid House are popular with Tourists.

There after proceed to Nuwara Eliya.

After breakfast, proceed to Horton plains.

HORTON PLAINS NATIONAL PARK – 20 miles (32 km) from Nuwara Eliya via Ambewela and Pattipola, is the Horton Plains only 3160 hectares in extent. Known to Sri Lankans as Mahaeliya, it became Horton Plains after Sir Robert Horton, British Governor from 1831- 1837. Horton Plains became a Nature Reserve in 1969 and upgraded as a National Park in 1988 due to its unique watershed and bio-diversity values.

Its flora has high level of endemism. The hills are covered with diverse wet low evergreen forest with even large trees grown flattened to the ground on the higher windswept slopes. Horton Plains harbors 52 species of resident birds and 11 species of migrant birds.

“World’s End” and “Little World’s End” falling from the Horton Plains 1000 feet and 3000 feet respectively, to the land below and the Baker’s falls are places you should visit.

This is the only National Park where visitors could walk on their own in the designated tracks.

After breakfast proceeds to Bentota via Kithulgala

Kitulgala – It is one of the most famous places for White Water Rafting adventures. However, there are many more reasons why this spot, just 100 kms from the capital Colombo, is well worth visiting. Chief among these are the historic Beli  Lena Caves where the pre-historic Balangoda Man supposed to have lived. The caves are reached after a short 10km drive from the main road through the Kitulgala tea estate.

David Lean’s epic war film “Bridge on the River Kwai” was filmed in this area of the Kelani River, which runs through Kitulgala, and the ruins of the bridge remains.

Breakfast at the hotel

Rest of the day at leisure on the beach

GALLE – Sri Lanka’s most historically interesting town is Galle. It was a major port until about 100 years, but today still handles shipping and sailing boats in the natural harbor.

Stroll around the lighthouse and harbor or visit the old town where you can see the traditional lace makers and wood carvers and purchase some the finest souvenirs.

TURTLE HATCHERY – Is one of Hatcheries where the eggs are left at the nests on the beach, well protected from predators and people until they are hatched and allow the young ones to go to the sea in the natural way.

This is a place where you can see the Turtles when they come ashore, lay their eggs, close the nests and goes back to the sea.

Here you can see the 5 species of Turtles coming to our beaches to lay their eggs.

After breakfast proceeds to Colombo

Colombo – a drive through the city taking you to the busy commercial areas as well as the tree-lined residential, Cinnamon Gardens. Visit Fort, the former British administrative center and military garrison, Sea Street – the Goldsmith’s quarters in the heart of Pettah, the Bazaar area, where is also a Hindu Temple with elaborate stone carvings and the Dutch Church of Wolfendhal dating back to 1749. Also visit the BMICH, see the replica of Avukana Buddha and Independence Square.

After breakfast leave to Air port for your next Flight. 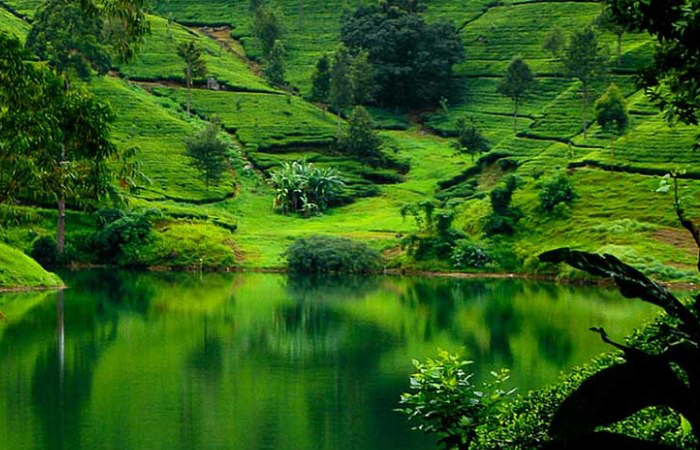